As the seriousness of the coronavirus pandemic became increasingly clear several weeks ago, we realised that there might be an important role for Roundups to play in supporting charities through and beyond this terrible time. We decided to hold off on any public corona-related comms until the unpredictable repercussions of this disease became more predictable and we gained clarity over what, if any, our role would be. Now that the anticipated long-term negative effects of the coronavirus look more inevitable than speculative, it feels like the right time to share our thoughts on how Roundups can support the third sector in the short and long term.

If you haven’t heard of it, Roundups is a fundraising app which links with your bank/credit card in order to round up all of your payments and donate pennies to a charity of your choice as you spend. It also tracks the impact of your donations and celebrates the collective impact of the community, building rewarding relationships between donors and charities in the process.

The overwhelming urgency and size of the Coronavirus pandemic meant that, like everyone else, our attention naturally turned towards supporting large-scale solutions like the NHS or developing countries who lack reliable healthcare systems.

However, by design, the Roundups app only asks for very small donations from any individual. That’s quite literally the point: small donations that, as an individual, you will not miss or perhaps even notice. Because of this, the whole concept depends on many people using it. The Roundups app is very new and we simply have not reached that critical mass of users yet to make a significant dent in the wider Covid-19 problem. If we joined the likes of the heroic Captain Tom in raising money for the large-scale support systems, we would only raise a very modest amount of money. This is because the impact of any individual’s penny donations is not motivating enough to use the app: it feels like a drop in the ocean. More importantly, it would not be an efficient use of our time or product. We realised that our efforts would be better spent elsewhere. 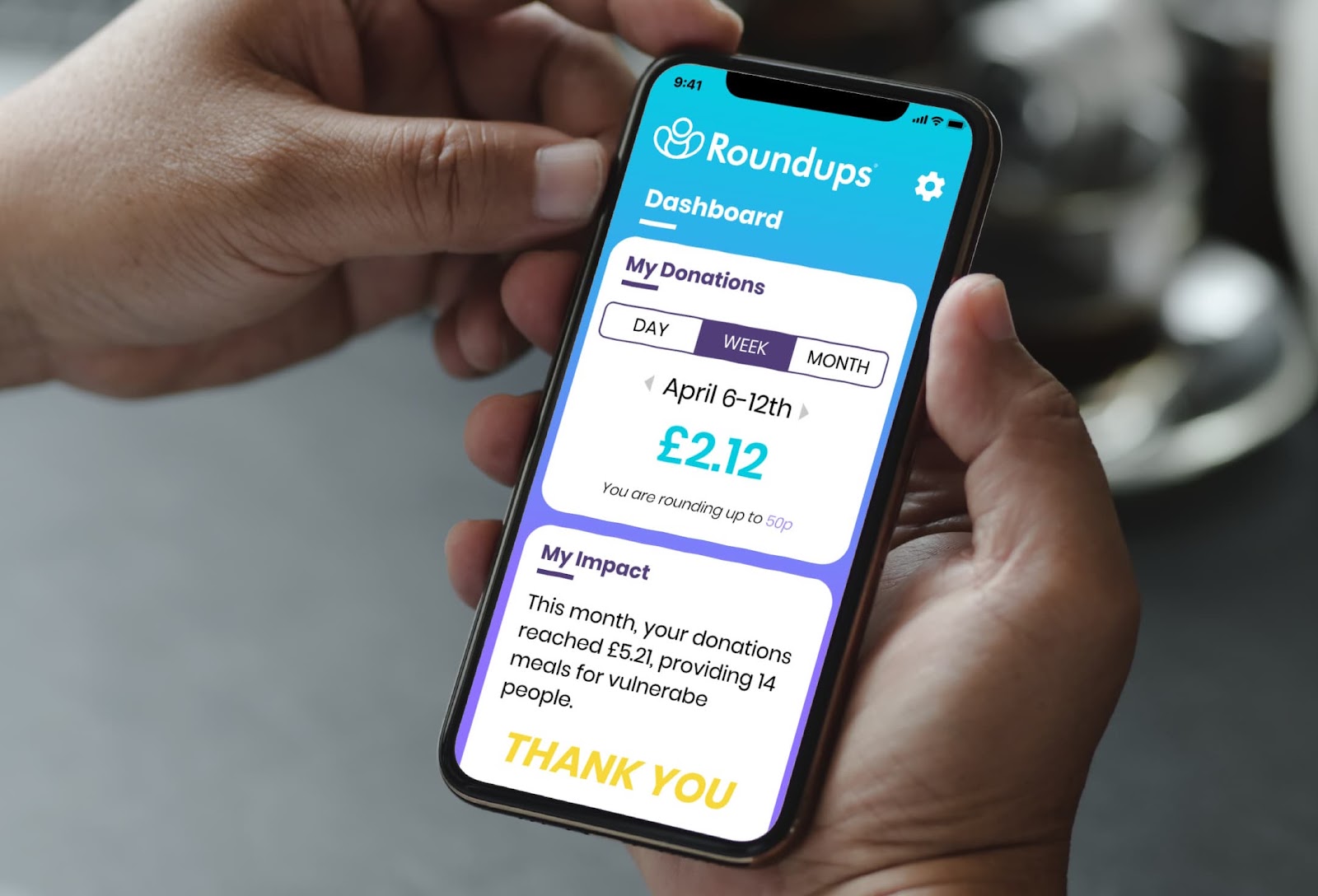 It makes sense for us, then, to focus on where penny donations from small groups can actually make a tangible difference. It is with these groups that Roundups, even in its infancy, has particular potential to mobilise people and generate donations. Sadly, you do not have to look very far to find communities for whom small amounts are the difference between eating and not eating. The Food Foundation found that 1.5 million Britons reported not eating for a whole day because they had no money or access to food during lockdown. Statistics like this make you appreciate that this problem is a seismic one too. However, it can be positively affected by small community groups working around the clock to support the most vulnerable - many of whom have fallen through the cracks of well-intentioned large-scale government initiatives.

It is these community groups and local charities that Roundups automatic penny donations can support in the short term. We have decided to focus our resources into supporting such organisations across London but particularly in Ealing, largely because we already have some roots here which will allow us to spread more quickly. We will announce all of the Covid-19 initiatives available to support on Roundups soon. If you would like to suggest an organisation, please contact hello@joinripples.org for details.

As we approach one month of lockdown, spending has necessarily moved online so it is also worth adding that Roundups captures online spend. This means that people can provide much-needed support to charities throughout lockdown just by activating Roundups and shopping online. The increase in online spend has been so great, that even a fraction of this could provide crucial relief to many great causes during the outbreak.

In March, the NCVO reported that charities would lose an estimated £4 billion in 12 weeks as a result of the coronavirus outbreak. The government announced a £750m support package for charities in April, on which the NCVO commented: “it is an important first step, though it will not prevent good charities around the country from closing their doors.” The long-and-short of it is that the third sector will be irrevocably damaged by the crisis. This is coupled with an impending recession that could make the 2008 collapse “look trivial”.

These bleak realities are juxtaposed against an inspiring outpouring of altruism across the entire world. Can you recall a greater global togetherness, ever? It remains to be seen if this level of goodwill can sustain when things return to “normal” but the lingering memory of coronavirus will surely maintain an above average sense of communal responsibility and activism for some time.

During the 2008 recession, the total amount of charitable giving fell by 11%. However, donations as a percentage of income, only decreased slightly. People were also more thoughtful and deliberate about the recipients of their donations, with a greater preference for poverty-relevant causes. This data suggests that people cared just as much but were forced to be more frugal and targeted with their charitable giving.

The Roundups app is designed to do three things:

Roundups is exceptionally well-aligned, then, to a world where people are feeling the pinch, wanting to be savvy with their charitable giving and feeling a powerful sense of global responsibility.

We as a brand, and we - Sean and Matt - as people, are not the type to spew hyperbole about how the Roundups app is going to raise millions overnight and save the third sector. This is obviously not the case. We do believe, however, that Roundups can play a significant part in supporting charities in the long term come what may. The appeal of automatic penny donations is instinctive under ordinary circumstances and even more apt amidst a global pandemic and potential recession. We are ready to do everything we can to help.

If you would like to donate pennies as you spend via Roundups, you can sign up at www.joinripples.org.

We use cookies to give you the best online experience.